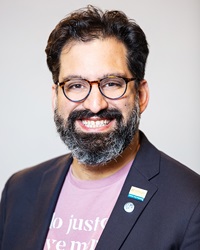 Imran Mohammed Siddiqui was elected to a six-year term as vice president of the Evangelical Lutheran Church in America (ELCA) at the 2022 Churchwide Assembly in Columbus, Ohio.

Siddiqui was born and raised in New Jersey in the Muslim faith. In 2002 he received a Bachelor of Arts degree in political science and economics from Rutgers University in New Jersey. Siddiqui moved to Atlanta, Ga., to attend Emory Law School and, after receiving his law degree in 2005, decided he liked the area so much that he would stay. An atheist in college, he converted to Christianity in 2009 through the work of the Spirit in the Pentecostal church. After being invited by two of his friends to worship at St. John's Lutheran Church in Atlanta in 2011, he fell in love with the liturgy and the Lutheran focus on God's grace. He soon became a Lutheran.

Siddiqui was first elected to the Southeastern Synod Council in 2015, and in 2018 was elected as synod vice president. He was reelected in 2022 but is unable to serve his second term due to his election as ELCA vice president. He also serves on the board of the Lutheran-Episcopal Campus Ministry, known as "Grace House," at Georgia Tech in Atlanta.

Siddiqui is a senior investigator for the U.S. Department of Labor, where he investigates employer-sponsored pension plans and health care plans. He lives in Decatur, Ga. (well, unincorporated Dekalb County, Ga., to be exact). Siddiqui is married to Kendall, an elementary school art teacher in the Dekalb County school system, whom he met at St John's. They have a son, Asher, and are expecting a girl in May 2023. They are still members of St. John's.